I found myself recoiling a little bit from Jacqueline Kennedy's oral history taped in 1964 and revealed today for the first time.
To wit: She said her marriage to JFK might have been "rather terribly Victorian or Asiatic," but she was determined to provide a "climate of affection, comfort and detente."
She also claimed she got all of her opinions from her husband. And finally, she said: I think women should never be in politics. We're just not suited to it."

Puhleese...It's difficult to imagine she believed what she was saying. But if she did, Jackie evolved significantly over the next decade into the confident Jackie O: a widow for the second time, a preservation activist saving Grand Central Terminal from being destroyed, and a book editor. A person unafraid to admit she had opinions or plant them in others. I like that version better. 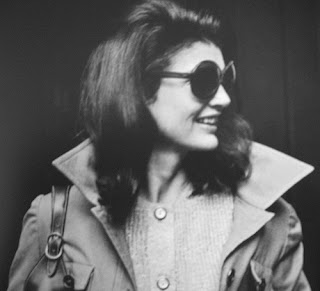 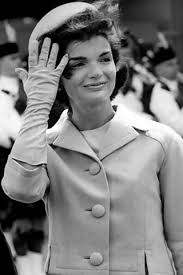 Posted by Tina Cassidy at 9:16 PM No comments:

Clint Hill (yes, that's me below with him) is a legend in his own right: the man the Zapruder film will forever show as the Secret Service agent who climbed on the back of the limo as the assassination unfolded in Dallas. For four years -- three during the presidency and one after Jacqueline Kennedy and the kids left the White House -- Hill spent 80 percent of his time, including holidays away from his wife and two sons, protecting the former First Lady, and her children Caroline and John. 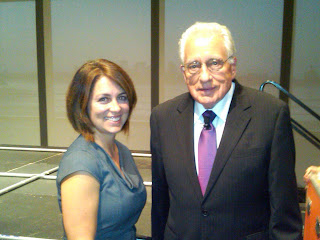 Tonight at the JFK Library, in a rare conversation, the tight-lipped "Mr. Hill," as Jackie called him, said he thought he'd be attending teas during his details with her. But that was not the case.

"She didn't go to teas," he said. "But we did go to two fashion shows -- one in Lahore and one in Karachi."

Hill said it was difficult protecting a woman who was adventurous; she loved to ride horses and water ski, neither of which he knew how to do. At her urging, Hill, from North Dakota, did take water ski lessons from the Navy man who drove Kennedy's boat. Hill wasn't very good at it and Jackie soon gave up asking him to ski along beside her.

He was also her (not so good) tennis partner. "For a very, very short time."

When he wasn't sporting, Hill did much of the advance work for her travel and stayed with her when she was abroad, including her time on Aristotle Onassis's yacht, the Christina, when Jackie went to recover after the loss of a preterm baby in the summer of 1963.

"Every day a sea plane would deliver the newspapers," Hill recalled of the their time on the yacht off Greece. "It was rather lavish."

A few weeks after that trip, Hill was surprised to hear that Jackie would take part in her first reelection campaign stop -- in Dallas. After the assassination, Mrs. Kennedy turned to him and said: "What's going to happen to you now, Mr. Hill?"

He stayed in the Secret Service until 1975 and had "a difficult time for a number of a years" processing the events of Nov. 22, 1963. In 1990, he returned to Dealey Plaza, looked down from the window of the school book depository and realized there was nothing he could have done to stop JFK's murder. "It was," he said, "completely out of my control."

Hill was reticent to talk about many things, but divulged some no-so-secret agent information:
1. Jackie was a closet smoker. "I was her enabler. I was the guy with the cigarette and the lighter. You can blame me."
2. The Kennedys never carried any money. "Going to Mass, when the plate came around, he [the President] would show his hand."
3. "She loved to read the scandal sheets -- especially about her. But she didn't want anyone to know, so I bought them for her."
Posted by Tina Cassidy at 8:36 PM 2 comments:

This piece in the Times today brought it all back.

I was wearing stilettos with a Velcro ankle strap -- which would be an important detail as the morning unfolded on Sept. 11, 2001. Dressed for a long day of covering fashion shows in NYC, I was sipping a cappuccino before my 9 a.m. start, marveling at the bright blue sky with fluffy clouds and replaying the previous night in my mind: Marc Jacobs had thrown a fashion show and after-party of Biblical proportions. Bowls of sugared fruit, celebrities, music, perfumed air. A call to my cell phone halted the memory. It was my mother telling me about the first plane.  I hung up and, as a journalist, instinctively headed to the World Trade Center. Without changing my shoes or my skinny Helmut Lang pants, I jumped in a cab, which drove me a short distance south but then refused go further saying we were "under attack" and he was leaving town. I got on the subway, at that moment still operational, emerged from the station and ran toward what had since become two burning towers. Standing in front of City Hall, waiting for traffic to pass so I could keep going, a police officer pushed me and told me to run -- the other way. A needed dose of reality. At that moment, the first collapse had begun and the all-encompassing smoke and rubble filled the air. I thought the tower was taking everything down with it -- like dominoes. So I tried to run down the middle of the street, as far as possible from any other structure. But I was unable to pause to undo the ankle strap in the stampede. I had a moment of black humor. They can put "fashion victim" on my tombstone.

I ran 14 blocks without stopping. I filled my notebook with interviews of people who had escaped death by one floor. And then I ran back for more. Half way there, the second tower fell. Adrenaline wearing off, insanity setting in, I turned on my heels once more to flee. For good.

The next day, on the very spot where Marc Jacobs held a party that would seem uncouth any time after 9/11, rescuers had transformed the space into a morgue.

I threw away the shoes, caked in grief. The classic pants still fit (thankfully), but I wear them infrequently due to the negative connotations. Any morning with a bright blue sky, low humidity and fluffy white clouds is, and always will be for me, a Sept. 11 morning -- the morning before all the bad stuff happened.
Posted by Tina Cassidy at 2:25 PM No comments:

My mother surprised me with a little gag gift -- a Jacqueline Bouvier Kennedy action figure, still in the box!  The doll, dressed in an ensemble that Jackie wore to India, talks when you press a button on her back. She has a 19-phrase repertoire, saying such brilliant things as, "I am Mrs. Jack Kennedy" and "Well, I must say, I don't think there's very much time for socializing." 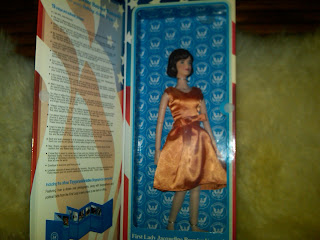 There are a few other chestnuts: "When I was first married our life was almost as hectic as it is now, and I found it rather hard to adjust. But now I think politics is one of the most rewarding lives a woman can have -- to be married to a politician."

She also says a few words in Spanish, having campaigned for her husband in that language a few times. The voice sounds like an authentic recordings of hers, but, alas, her stockings are baggy and her bouffant bob is plastic.

Posted by Tina Cassidy at 6:59 PM No comments: