Jackie O leads the charge to save Grand Central in 1975 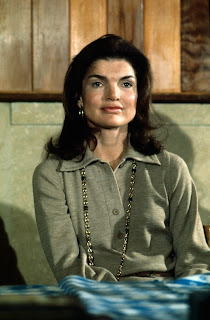 This is one of my favorite pictures of Jacqueline Onassis from 1975, the year when Aristotle Onassis died, she becomes engaged in the battle to save Grand Central from redevelopment ruin and she becomes a book editor. Essentially, 1975 is the year that Jackie has a midlife crisis -- she loses a husband, saves a landmark and finds herself.

The picture above is from a dramatic press conference held in the train terminal's famed Oyster Bar (see below for a picture I took recently -- still looks like 1975 inside!). I love the expression on her face, which reflects her serenity, power, and knowledge that she is the center of attention, sitting before a media horde from around the world, assembled in the subterranean restaurant to hear her big voice that sounded little.

Jackie proved herself to be a public relations mastermind when it came to repelling real estate developers' dreams of altering the built environment of New York City. 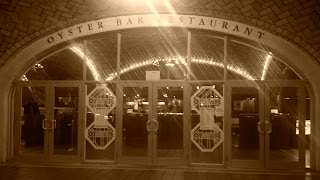 Grand Central was her first real victory.
“If we don’t care about our past we can’t have very much hope for our future,” she said into a bank of microphones and over the din of flashbulbs popping. “We’ve all heard that it’s too late, or that it has to happen, that it’s inevitable. But I don’t think that’s true. Because I think if there is a great effort, even if it’s the eleventh hour, then you can succeed and I know that’s what we’ll do.”
Her words, which she had written herself, were spare. She knew from her political experiences that if she delivered a forty-five-minute speech it would lose its effectiveness and she would have a greater chance of being misquoted. Deliver a sound bite just right and the press had to use it. They had nothing else.
Posted by Tina Cassidy at 5:58 AM No comments: