Yesterday marked what would have been the 43th wedding anniversary of Jackie O and Aristotle Onassis.  Jacqueline Kennedy stunned so many by marrying Onassis, who was the opposite of her first husband in appearance, age and approach to many aspects of life. He was mercurial, could be crude, and was old fashioned about many things, especially his treatment of women. He flaunted his affair with Maria Callas, before and after he married Jackie. Indeed, Onassis was an incongruous mate for America’s queen: 29 years older than Jackie, two inches shorter at just five-foot-five, fatter, rougher than the horsy-artsy-intellectual crowd with which she was imbedded. He was a divorcee and world-class womanizer. She was the good Catholic who had learned to turn the other cheek in her first marriage. He loved bouzouki music and smashed pottery in Greek tavernas, once running up a bill as high as $1,000 for all the dishware that he threw one night. She loved the theater. He didn’t. He was a night person, typically waking when she was eating lunch. Onassis often wore a dark suit and tie, even in the summer. Jackie, by contrast, was always impeccably dressed according to season and occasion, and a regular at Valentino – who had made the off-white knee-length skirt and lace-covered sweater she wore for the Greek wedding.

Whatever reasons she may have had for marrying Onassis – love, money, security – even her admirers were perplexed by her choice.

When her friend Truman Capote asked her why, she said, “I can’t very well marry a dentist from New Jersey!”

Other friends told her she was going to fall off her pedestal if she married Onassis.

“That’s better than freezing there,” she scoffed.
Posted by Tina Cassidy at 2:03 PM No comments:

Last night, at a forum at the JFK Library, Caroline Kennedy talked about how her mother had reacted to the "hideous surroundings" of the White House that Jackie and the president-elect were inheriting from the Eisenhowers in 1960. Jackie first saw the White House when she was 11 on an Easter trip with her mother. Her impression did not improve when she returned as an official guest when JFK was a senator and they attended receptions and lunches there together. But Jackie was truly horrified when she walked through the space shortly before the inauguration, guided by First Lady Mamie Eisenhower (who liked pink and ate dinner on a tray in front of the TV!); she saw that the mansion was filled with uninspiring and institutional B. Altman furniture.
Jackie hired her favorite decorator, Sister Parish, and soon after, Stephane Boudin of Jansen in Paris, who had renovated part of and had agreed to do the White House work for free. 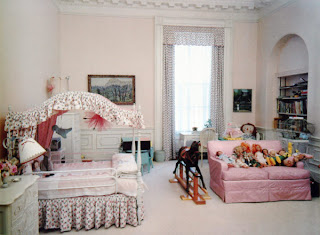 "It was controversial and carried political risk," Caroline said of the White House project.
While I was researching Jackie’s interest in historic preservation for my book, I enjoyed reading White House memos that were written during the renovation -- letters revealing the painful details of the project. I especially appreciated this one below – a memo from the Kennedy family office (which paid Jackie's bills) to Sister Parish, who also worked on Jackie's other homes.
Dear Mrs. Parish…Mrs. Kennedy was horrified to see that she was being charged fifty  dollars a piece for two waste baskets and thirty-five dollars a piece for two tissue boxes. She never requested hand-painted designs to be applied to these; what she asked for were ordinary department store scrap baskets and Kleenex boxes to be covered with wallpaper used in the room, as she had done here in Washington, at Miriam Crocker’s, before her approximately $7.50 for the waste basket and $5.00 for the tissue box. Mrs. Kennedy would like to know if you could do the same for the same amounts as Miriam Crocker, taking the present ones back.
Posted by Tina Cassidy at 7:39 PM No comments:

I just found this fantastic recent picture of Jackie's younger sister, Lee, taken on the streets of Paris by the talented Sartorialist. Lee lives in Paris. And every year around this time -- and in late winter -- when the fashion shows are running, I get a twinge for the city I used to visit twice annually for the sole purpose of looking at and writing about clothes.

Anyway, Jackie introduced Lee to Paris as a high school graduation gift in 1951. The travelogue from that trip, which began aboard the Queen Elizabeth, became a book that Lee published in 1974 called "One Special Summer." I have an original copy of it, from my father, and I love reading the handwritten notes, poems and sketches that the sisters jotted down. Jackie was a talented writer and artist, even then. Lee, always beautiful, even now.

Posted by Tina Cassidy at 10:25 AM No comments:

I was shopping on Amazon and stumbled upon my own book - to be published next March. Gee, that was a fun surprise. Makes it feel real.
Posted by Tina Cassidy at 5:29 PM 1 comment: