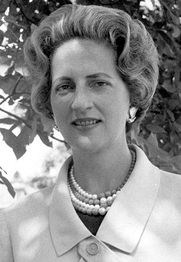 I was very sorry to hear that Letitia Baldrige has died. As Jacqueline Kennedy's White House social secretary, she helped the First Lady elevate the 1600 Pennsylvania Avenue to a magical stage filled with arts and culture -- and hard liquor.

But I will always think of her as more than that. I spoke with Tish for many hours as I was working on my book about Jackie's Third Act. In the same way that Jackie's little-girl voice belied her fierce intellect, Tish had a high-pitched Julia Child-like voice, but was tough as nails. She enjoyed eating in what she described as the "mess hall" in the White House so she could argue with the boys. And she delayed having a family (when doing such was not common) so she could work around the clock during the Kennedy Administration. She later became an expert on juggling work and family and even wrote a book by that title which she was working on in 1975 when Jackie, who had just become a widow for a second time, had lunch with her.

Jackie was depressed. Tish told me that when her old friend entered the Sulgrave Club in Washington to dine with her, she was impeccably dressed, but "drooping." Tish gave her sage advice, telling Jackie to stop hiding her intelligence "under a bushel" and to go get job.

Tish suggested publishing, a job that would offer flexibility as well stimulation. Jackie loved to read -- and write. Tish offered to introduce her toTom Guinzburg, her own publisher at Viking, where Jackie several months later would land her first job as an editor -- a career that she embraced for the rest of her life.

Posted by Tina Cassidy at 3:51 AM No comments: