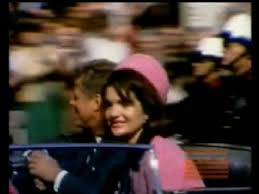 Though there remain many other mysteries from that awful day, what we do know is that Jackie, like her country, persevered. She raised her children, established a career as a book editor -- not for the money but because she enjoyed the intellectual stimulation -- and became a preservation activist to save important buildings such as Grand Central Terminal. Those more life-affirming aspects are always what I prefer to remember each Nov. 22, especially this one.
Posted by Tina Cassidy at 6:00 AM