I spent my morning at the JFK Library poring over newly released personal papers that belonged to Jacqueline Kennedy during her White House years. Much of the documentation relates to her restoration of the White House. See my blog post below.

But I always enjoy finding the little gems that humanize an icon: her memos about choosing what would become her trademark blue stationery from Tiffany; how she was concerned about the White House nursery school's car pool schedule (what if a child didn't have a ride!); the typed up plan for John Jr.'s play dates (Tuesdays at Jonathan's in Chevy Chase); and even her Christmas shopping list, which included Van Cleef & Arpels, where her engagement ring was from, Maximillian Fur Co., Givenchy, Bergdorf Goodman, Chanel, Norman Norell, and Design Research, the little shop in Harvard Square owned by Ben and Jane Thompson.

Readers of this blog might recall that last summer we stayed at the Thompson summer house in Barnstable, just across Route 6 from the Kennedy compound in Hyannis Port. Later, we heard that Jackie used to go to the house -- apparently she was a fan of Marrimekko, which the Thompsons sold at DR. Today, I stumbled on the proof in her Christmas list, which listed the house's address. 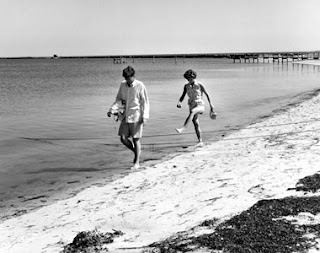 I can picture Jackie pulling into the gravel driveway wearing her Renauld of France sunglasses and a scarf on her head. Makes me nostalgic for the Cape in the summer.
Posted by Tina Cassidy at 11:50 AM