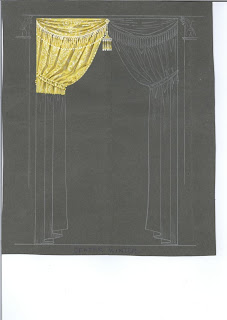 Yes, she sketched the draperies (above) and chose the colors -- but went far beyond that. The papers, released 50 years after she gave a televised tour of the nearly completed work, show that she was studious and intense about the project, scouring old receipts and photographs to find objects, their origins, and where they belonged in the White House, including four Cézanne paintings hanging in the National Gallery of Art that were moved to the family quarters.


She consulted historians and made basement spelunking expeditions with Lorraine Pearce, whom she hired to be the White House’s first curator. They found Teddy Roosevelt’s rugs, Monroe’s gold and silver French flatware and a heavy oak desk, piled with electronics in the broadcast room, that Queen Victoria had given to President Hayes. Jackie had it set up in the Oval office. John Jr. would later crawl beneath it.


The restoration took about two years, but on Feb. 14, 1962, she wore a red Rodier boucle suit and took America on a one-hour televised tour of the mansion, a Valentine for 80 million viewers, few of whom knew she was also strategizing to save Lafayette Square -- a grassy quadrangle surrounded by 18th century town homes in front of the White House -- at risk of being replaced by modernist office space for the government (a plan Eisenhower had set in motion).


Later, in 1975, she catalyzed New York City to save Grand Central Terminal from being obliterated for a bland skyscraper, a case that went to the US Supreme Court and made historic preservation mainstream in the process.


Half a century later, on the golden anniversary of her televised White House tour, newly released memos confirmed that she was the politically and historically astute ring leader of the restoration. In the midst of other “news” last week about JFK’s affair with a White House intern, we’re still watching Jackie, hopefully more enthralled with her accomplishments – then and later in her life -- than her husband’s conquests.